2015 marks Cha Cha Beauty & Barber's 19th anniversary. How long have you worked at Cha Cha? Why hair as a career?
I've been working at Cha Cha for 10 wonderful years!  I started as a client, then receptionist, and after a little bit of prodding, I accepted an apprenticeship position.  For as long as I remember, I'd always wanted to do hair, but just had to wait for the stars to align!

You regularly volunteer your time and services for Coopers Tavern's St Baldrick's annual fundraiser. Tell us more about it!
Several years ago friends of mine from the Arsenal Supporters Club approached me with the opportunity to volunteer to shave heads for the St. Baldrick's Children's Cancer Research Foundation. It's every year before the parade on the Sunday of St. Patrick's Day weekend, at Cooper's Tavern on the square (details on this year's parade here) .  The ASC raises money for several charities throughout the year, with this one being their largest.  Basically I agreed because I wasn't doing any sort of volunteer work at the time, and the idea of shaving a room full of people's heads was really exciting to me. The day of the event is so cool because the energy in the room is really high!  Once people start 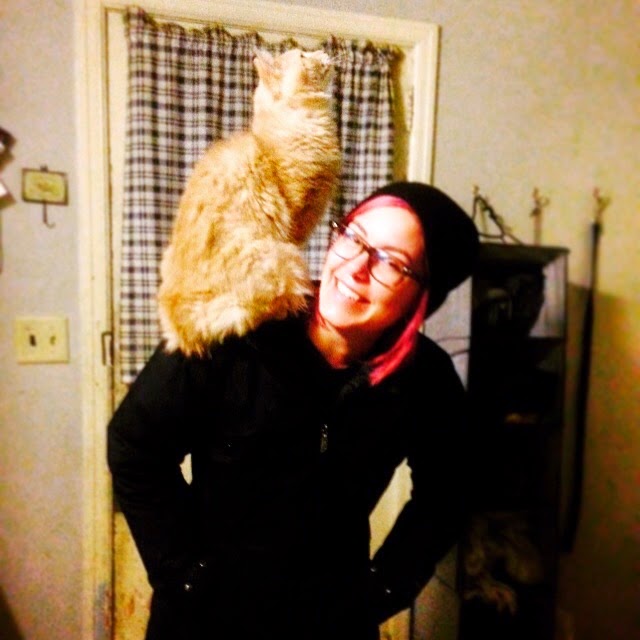 losing locks, it's great to see the camaraderie amongst the shavees, how proud they are of what they've raised and what they're doing, and some people are so taken by the whole thing that they decide to shave their heads last minute.  At last year's event, I remember one little girl, probably about 7, walked up to my chair.  I couldn't decide who was more nervous, her or me (somebody later told me they could see me shaking)!  Like a little trooper she sat down in my chair, and I quick lopped off her ponytail.  Gingerly I showed it to her, and the biggest smile came across her face.  That's definitely been the highlight of this event for me, by far. To donate or participate, visit this page.

You're an awesome mom to two adorable rescue dogs. We all want to know more about them!
I have two giant pitties, Murphy and Brisco, 5 and 4 respectively.  Unfortunately, due to one of them in particular suffering from pretty gnarly separation anxiety, they are crated when I'm at work.  However, Shelly is gracious enough to be flexible with my schedule so that they don't have to be locked up for a million hours a day. I make sure to leave them with stuffed kongs, toys, blankets, lights and music.  When they're not crated, they're just like any other boys, and it's Wrestlemania in my house.  I come from a long line of Humane Society supporters, so when it came to adopting, we went to the closest resource, the DCHS.  As much as I loved pitbulls, I was renting at the time, and it's next to impossible to rent when you have a stigmatized breed of dog.  But a friend of mine sent me a link to Murphy's page and it was love at first sight!  Due to my love of the breed, I follow probably every pitbull organization and rescue on the internet.  I particularly love the New York City Bully Rescue.  They have a huge internet presence, and they're constantly rescuing dogs from atrocious situations and conditions, and sharing their successful placement stories.

What brought you to Madison? Why do you stay?
At this point I've lived in Madison for half my life, which is kind of crazy for me to think of. Before living here, I never lived in one hemisphere of the earth for more than five years.  My dad was an engineer, and always took foreign contracts, which was rad because I got to live in Canada, Venezuela and New Zealand, and travel around a ton. We got to Madison in time for me to finish my last year of high school, and then ship off to Milwaukee for college.  That only lasted a year though, and I came back and ended up graduating from UW-Madison with a degree in Philosophy.  I guess I can't really say what kept me here.. I think it was really a combination of finally wanting to stop moving and put some roots down, and Madison being a super cool little city.  I have no problem leaving and coming back, and I really haven't found anywhere that compares yet.  Sometimes it can feel a little claustrophobic, but that's when you know it's time to take a vacation!

Favorite place to visit?
Obviously always New Zealand because it's the best country, but I have a wicked case of wanderlust!  I want to travel more around the South Pacific, go surfing in Indonesia, and I'm currently obsessed with going to Cuba.

Back to hair. What's all this talk about Olaplex? What is it? What kind of hair will it benefit?
One night, while nerding out on my computer, I came across a product called Olaplex that promised to "never break a client's hair again!".  Obviously that sounded way too good to be true, but curiosity ensnared me and I spent the entire night doing research on this new, seemingly miraculous product.  Color and bleach processing breaks down bonds within the hair, and Olaplex is a 3-step process that multiplies these bonds instead - ultimately leaving your hair in better condition than what you came in with.  It allows us to safely push the boundaries of what was achievable before!  You can use it as a treatment on it's own to improve hair quality, or as an additive to any chemical process.  The best part about it is that there is a take home leave-in, so the client can maintain their results until their next appointment.  We've been experimenting here at the shop (which is the only reason my baby hair is now baby pink!), and I have to say I've been really impressed with the results.  I've noticed minimal breakage, great hair-strengthening results just using it as a treatment, and lifting color past what I've felt comfortable lightening to in the past.

We'll end our chat with a drink! Your favorite cocktail and why?
I like girly cocktails, so pretty much anything on the Opus menu!  I love the Tranquila from Mickey's Tavern, and a good Maker's Old Fashioned sour helps keeps winter at bay.  But, I'm a wine-o for the most part.
Posted by Cha Cha Beauty and Barber at 3:10 PM

A bit about Cha Cha